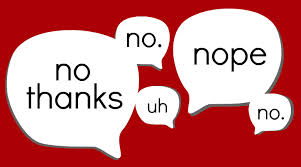 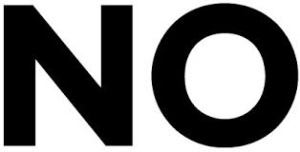 “No.” Kids don’t want to hear it, adults don’t want to hear it. So afraid are we to experience the feeling of rejection we conjure up when we hear someone tell us “No” that many of us never reach our goals or fulfill our dreams.  “No.” Say it with me: “No.” It has a certain finality to it, a ring. Most of the time, we dread hearing that word.

But no is not negative. It doesn’t restrict you, it frees you. After “No” comes the freedom to move on. It frees you from bad ideas and money-losing ventures. It keeps you from being tied to people whose company you do not enjoy and things that you don’t want to do. How many times have you said “No” today? Most of us try our best to say “Yes” more than we say “No” but is that wise?

“I say No more than I say yes.” – Warren Buffett

When I first started out in real estate, my mentor taught me that sales is a numbers game and I would hear “No” far more than I heard yes. That being the case, I needed to make enough calls per day to get through the NOs and get to the YESes. I learned early on not to be disappointed or disenfranchised when I hear the word No. People use the word so often. If I experienced an emotional setback every time someone told me “No,” I would never accomplish anything!

Why do we run from the word “No”? Think of how much we miss out on by running from the rejection, when in reality, the experience of feeling rejected is all in our minds. Let’s say you want a raise but you are afraid your boss might say “No.” Due to your expectation, you may not even ask for the raise even though you deserve it. Or you may want a loan from the bank, but your expectations of the word “No” may keep you from preparing the loan package properly.

What does the word “No” mean to you? Why is it so crucial that you keep yourself from hearing it? If anything, you should say it more!

Don’t be afraid of the word NO.

Look at “No” as a powerful word that frees you to move on to the next adventure, to find another alternative. Just think of how much time you would waste if you delayed asking your target to make a decision. Without that all-important “No” you wouldn’t know when it was time to seek other opportunities.

Successful people don’t delay. They don’t dilly-dally. They have no problem saying or hearing “No.” In fact, they say “No” far more than they say “Yes.” Warren Buffett credits his willingness to say “No” as a hallmark of his success. On the flip side, there’s Antoine Walker, an ex pro football player who lost his $100 million fortune and credits his inability to say “No” as one of the primary culprits.

As an individual, business person, husband, wife, or leader, make sure you have the word “No” right at the tip of your tongue and ready to go, and make sure you recognize “No” as a decision, not rejection. Learn to say “No” first before you say yes. You can always change your mind and say yes later, but once you say yes, it may be hard or even impossible to un-yes the situation. And get really good at making a decision on-the-spot, rather than saving your answer for later. Remember, the moment you say “Yes” you are agreeing to a situation which may result in you taking on another person’s burden.

Practice saying NO. And watch your maturity, confidence and success grow by leaps and bounds.

Are You a Landlord When You Should Be a Bank?

What Has Fear Cost You?